Advocate video: What it’s like to sew the robes for the Polyphonic Spree

Lakewood resident Sandy Toby Kay is known to most (not just her 13 grandchildren) as Grandma.

Her daughter, Julie Doyle, and son-in-law, Tim DeLaughter founded the mega pop rock band Polyphonic Spree (if you think you haven’t heard of them, think again — their songs are regularly heard in TV shows, movies and commercials). 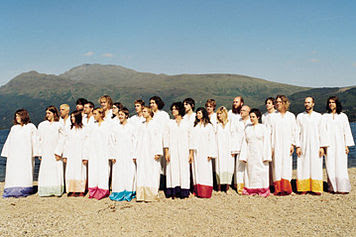 Look at all those robes!

Before I knew her as Tim DeLaughter’s mom-in-law, I knew Grandma as my daughter’s preschool teacher at Kid Country on Skillman and Monticello. I cannot even begin to tell you how energetic, loving and wonderful this woman is. And she played Trippin’ Daisy (that was Tim DeLaughter’s band in the 90s) tunes in the classroom — that won us over.

These days, Grandma has the not-so easy task of sewing robes for Polyphonic Spree’s 20-some members. When she posted something about it on Facebook, I immediately messaged her to see if we could send Turk over to shoot some photos. He returned with the video – even better.

WANT MORE?
Click to sign up for the Advocate's weekly news digest and be the first to know what’s happening in Lakewood/East Dallas.
By Christina Hughes Babb|2012-02-08T11:52:04-06:00February 7th, 2012|Entertainment, Music, News, Videos|3 Comments